When research I conducted last November on “Social Media Adoption by Medievalists” (slides here) showed that only 18% of scholars who adopted a public social media platform used Twitter, I was a bit surprised. There obviously are many more scholars on Twitter than the 18 people (out of a sample of 146) I discovered. I wanted to find these people and bring them together so I could engage and so others can have a go-to place for seeing what’s happening in the field on Twitter. So, how to accomplish this?

Inspired by Dan Cohen‘s use of his “Digital Humanities” Twitter List as a foundational tool* for the Digital Humanities Now platform for crowdsourcing news and scholarship in that field, I decided to try something similar with Medieval Studies.

I have therefore created a public list called “Medieval Studies” and included (at the time of writing) 524 759 801 Twitter handles.

I have included a mixture of faculty, researchers, graduate students, professional associations, centers and institutes. This is not a list of scholars strictly defined as “faculty” or as “people who publish”: it is academic in focus and intentionally inclusive.

Lurk around at will, but remember that this is meant to be a community-building tool, fueled by connections and conversation.

Here is a screenshot and link to the List: 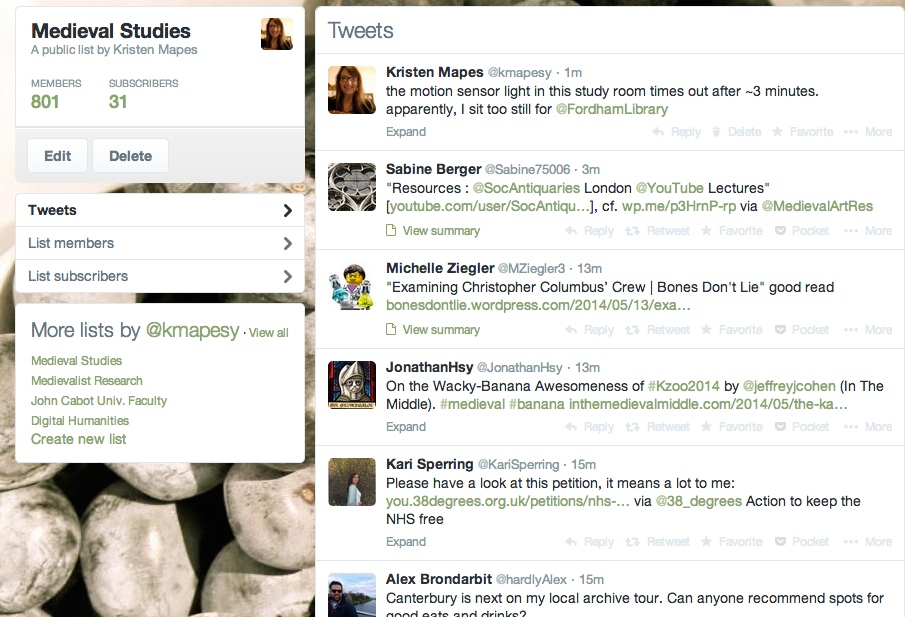 The List was built by looking at THE go-to Medieval Studies association – The Medieval Academy – and looking through all the existing Twitter Lists that included @MedievalAcademy. I then looked at all the other Twitter handles included in the same Lists as @MedievalAcademy and made manual decisions about who to include in my List. These decisions involved scanning descriptions of each handle, occasionally visiting a handle’s feed, and seeing if they were followed by anyone else I followed.

Through this strategy, I built on the work of the approximately 80 people who had created Twitter Lists of varying lengths at some point. To them: Thank You! A special thanks to the @Mittelalterblog Twitter List, of Medievalists, which provided an important supplement (over 200 names!).

I happened to be compiling this List during the annual Medieval Academy meeting, so I also added anyone who tweeted using its hashtag. Since the List has been running, I keep a column of it open in my Tweetdeck and occasionally add a handle that someone on the List retweets if as appropriate. I hope to add more people during the upcoming conference in Kalamazoo. [Update 5/13/14: I kept a column in Tweetdeck open for #kzoo2014 and the ill-fated #kzoo14 and tried to add as many relevant people tweeting from Kalamazoo as possible to the list.]

This is not the most scientific of approaches, and it required a significant amount of manual searching and snap decision making, but it has yielded a substantial list that I hope can grow and be useful to more people than myself.

Please feel free to leave comments or get in touch with me @kmapesy if you want to be added to (or removed from) the List. If anyone knows of a similar endeavor being done elsewhere, please let me know! I don’t expect to be the only one with this idea, and I’d love to collaborate to develop it.

*Dan Cohen’s Digital Humanities Twitter List isn’t used to source content for DHNow any longer, but it served as a point of inspiration in the creation and development of DHNow in 2009. For an explanation of DHNow’s launch, see this post.